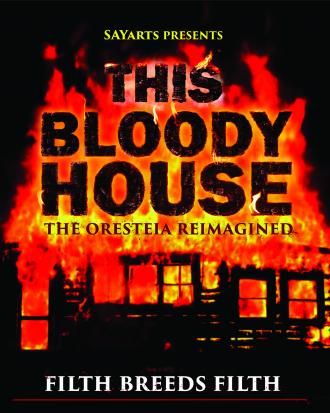 BUY TICKETS
A modern retelling of The Oresteia - set somewhere in suburban Adelaide. A family rips itself apart in the time-honoured tradition of Greek tragedy.
Presented by:
SAYarts

Award-winning playwright Sean Riley's latest play for emerging adults is a modern retelling of The Oresteia – the epic trilogy from the classical Greek theatre canon  that charts the destruction of literature’s most dysfunctional family; Agamemnon and his wife Clytemnestra, and their children Electra and Orestes.

Set somewhere in suburban Adelaide, a family rips itself apart in the time-honoured tradition of Greek tragedy.

In its classically staged form, The Oresteia runs a staggering five and a half hours, but  This Bloody House is an adrenalin-fuelled eighty minutes, reimagined and relocated in the dark underbelly of contemporary society.    In a world of violence, drugs, guns, and biker gang warfare, this family are now the most dangerous of criminal dynasties.  Brutal, retributive, and unforgiving, the plays are awash with familial rivalries, jealousies and revenge.

Performed by senior SAYarts students - it promises to be intense, funny, bleak, and memorable.

Directed by Connor Reidy – one of SAYarts’ finest emerging artists - and mentored by Sean Riley, This Bloody House is a funny, furious, blood-soaked exploration of the ultimate family from hell.