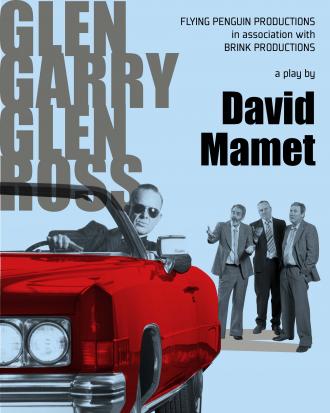 BUY TICKETS
In a fly-by-night office in Chicago, four desperate real estate agents are in the final days of a high stakes sales competition. The rules are simple: the winner gets a new Cadillac, second place a set of steak knives and the rest are f**k*d.
Presented by:
Flying Penguin Productions in association with Brink Productions
Tickets also available via:
NOTE: Latecomers will not be admitted

GLENGARRY GLEN ROSS is a high-octane, black comedy about power, betrayal and success.

Nearly 40 years after ‘Glengarry’ sensationally burst onto the stages of the world, becoming an instant cult classic, it remains a devastating and hilarious, modern-day morality tale about a burntout American dream and the business of capitalism.

In 1992 the play was adapted by Mamet into an Academy Award nominated film.

PLEASE NOTE: THIS IS A MASKED EVENT