Spooky Men of the West (Perth) 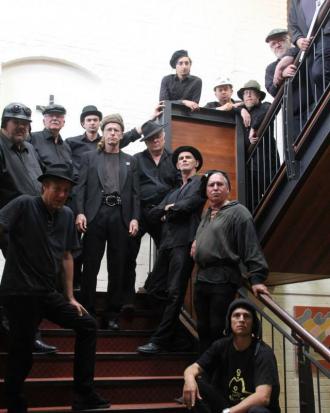 BUY TICKETS
A presentation of songs designed to amuse, confuse and entertain. ONE PERFORMANCE ONLY

A fifteen strong male A Capella choir the Spooky Men of the West (aka Dark Knights of Song) specialise in Georgian harmonies and songs of Stephen Taberner of Spooky Men’s Chorale Fame. Our songs include a passion for concrete, love song to a foot and a macabre version of Teddy Bear’s Picnic.

A presentation of songs designed to amuse, confuse and entertain with A Capella choral music under the direction of Micheal McCarthy, the Spooky Men of the West deliver vocal renditions ranging from Georgian table singing to the songs of Stephen Taberner including   ‘Magnificent’, ‘Don’t stand between a man and his tool’, and songs stressing the virtues of, and passionately denying affiliation to any men’s group.

Our origins lie within the twisted imagination of Stephen Taberner, a singer, arranger and formidable choir leader of the Spooky Men’s Chorale.  Legend has it that from his Spooky Men’s movement, the call went out throughout Western Australia for a performance group to entertain at the  Fairbridge Festival in 2005. Many, (mostly) males came forward, demonstrating the quintessence of vocal harmonic tonality and their superb manly prowess. The remainder were chosen to form the Spooky Men of the West.

We have been refining our pointless grandeur and manhommerrie over the past eight years now, with Western Australian performances at Fairbridge, Albany, Kalgoorlie, Denmark and Perth having entertained many and bewildered some.  Following our five star success at the 2014 Adelaide Fringe Festival, performing as the Dark Knights of Song, we will assume our original ‘Spooky’ title and perform at a number of venues as part of  the Adelaide Fringe Festival over the weekend 27th February – 1st March.